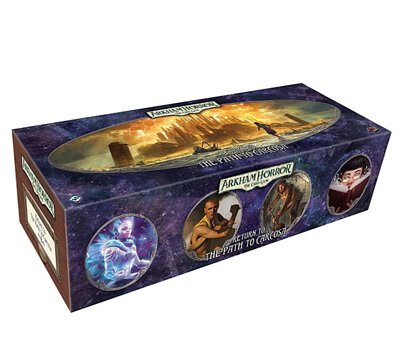 Sale HK$254.00
The maximum quantity per submit is 99999
This quantity is invalid, please enter a valid quantity.
Sold Out

"I cannot forget Carcosa where black stars hang in the heavens; where the shadow of men’s thoughts lengthen in the afternoon, when the twin suns sink into the lake of Hali; and my mind will bear for ever the memory of the Pallid Mask." –Robert W.Chambers, The King in Yellow

A new theater production is coming to Arkham all the way from Paris. Unsurprisingly, it's been all the rage in conversations among Arkham's socialites. But in your efforts to learn more about the play, you've uncovered a darker history. Disappearances. Suicides.Delusions. Insanity. Wherever The King in Yellow is performed, madness follows close behind…

In The Path to Carcosa, the second deluxe expansion for Arkham Horror: The Card Game, it becomes your task to uncover the secrets of this unusual play. The expansion's two scenarios kickoff The Path to Carcosa campaign with a trip to the Ward Theatre and an invitation to the formal dinner party hosted by cast and crew. But with every answer you gain and every clue you uncover, you only find yourself falling deeper into mystery and madness.

Along with its new scenarios and encounter cards, The Path to Carcosa introduces six new investigators and sixty-two player cards (including a complete playset of each) that afford you new ways to explore and enjoy the game—even as they challenge you to overcome new weaknesses.

Echoes of the Past

Echoes of the Past is the first Mythos Pack in The Path to Carcosa cycle for Arkham Horror: The Card Game.

The King in Yellow has come to Arkham, you caught the performance, and now you find yourself drawn into the maddening web of powerful forces and sinister event that seems to surround the mysterious play. So how do you proceed? Where do you continue your investigations? How you do hold onto the tattered threads of your limited sanity? If there are ties between the play and Arkham, there's one place where you might uncover them—the Arkham Historical Society, a landmark building that holds age-old secrets even its curator doesn’t know…

Even as it introduces a new scenario through which you can explore the Society’s hidden secrets—and the many terrors with which they are associated—Echoes of the Past introduces a wealth of player cards driven by two major themes that allow you to refine your investigator’s practiced Talent and Composure.

It was always going to come to this… You're finally headed to the asylum.

The Unspeakable Oath is the second Mythos Pack in The Path to Carcosa cycle for Arkham Horror: The Card Game, and it carries you deep into the belly of Arkham's asylum. You’ll find yourself behind locked doors, wracked by Doubt, and surrounded by Lunatics. And, still,you'll catch hints of deeper and darker secrets.

And while its scenario continues and deepens the game's exploration of the mystical realms between the traditional role playing and card game experiences, its twenty-four player cards(two copies each of twelve different cards) provide you access to a number of wealthy Patrons and allow you to "learn" from your mistakes.

A Phantom of Truth

Where do you go for answers when your world is tilting into madness? The answer: Paris. A Phantom of Truth is the third Mythos Pack in The Path to Carcosa cycle for Arkham Horror: The Card Game. As you investigate the mysteries behind The King in Yellow, the Mythos Pack's new scenario introduces a new set of clues, along with supernatural terrors that play upon your growing Doubt or Conviction. Amid these horrors,you'll find twenty-two new player cards (two copies each of eleven different cards) to help you stay grounded and pursue the truth.

From the streets of Paris to the city's subterranean catacombs, your pursuit of the truth behind The King in Yellow leads you farther and farther from Arkham's familiar landmarks. But the streets, the language, and the eerie, dark tunnels aren't the only foreign elements at play. There's something distinctly otherworldly in the Parisiancata combs…

In The Pallid Mask scenario, you and your fellow investigators will enter these tunnels in search of a stranger whom you believe must be connected to the events surrounding the performance of The King in Yellow at the Ward Theatre in Arkham. But with each new strange twist and turn, you'll find yourselves only stepping deeper into mystery.Perhaps you can follow the tunnels all the way to the pulsing heart of the play's mysteries, but there's a chance, too, you'll simply find yourselves lost amid the shifting landscape. What begins as a trek through moist and clammy tunnels of stone may become a journey that leads you under the earth, through The Gate to Hell, and straight to your demise at the Well of Souls or some other forgotten chamber.

Destined to be a fan-favorite,the scenario from The Pallid Mask utilizes the game's locations in a novel way,bringing them into play only as you travel through them, and arranging them in a constantly shifting and unpredictable fashion. Each new step through these labyrinths could be your last.

Your investigations have led you far from that fateful first showing of The King in Yellow at the Ward Theatre in Arkham. When you could no longer find the answers you needed in Arkham, you voyaged across the Atlantic to France and entered the catacombs of the dead beneath Paris. Now, you travel to the island commune of Mont Saint-Michel, as brooding, dark clouds cover the sky. A storm is coming—and it’s unclear if our world will survive.

Black Stars Rise offers the latest chapter in The Path to Carcosa cycle, and the latest tale of your own madness. You have looked upon the face of the Stranger. You have beheld the Pallid Mask and the Tattered Cloak. New player cards arrive in this Mythos Pack, cards with palliative names like “Stick to the Plan,” “Narrow Escape,” or“Ward of Protection.” Their names are a lie, dripping with false comfort that only the truly mad will embrace. The darkling spires of Carcosa are breaching the walls between dimensions and Hastur will rule over all…

Dim Carcosa is the sixth and final Mythos Pack in The Path to Carcosa cycle for Arkham Horror: The Card Game.

Your investigation into the mysterious play The King in Yellow has led you across the globe and brought you to the edge of madness. Now, in the final act of The Path to Carcosa you travel beyond the cosmos to a world a place beyond all imagining. Before you lies a warped, alien city. Its twisting streets and aberrant architecture have no semblance of order or structure. In the distance, a murky lake reflects the glare of two suns. This is Carcosa–the realm of madness in the stars, where Hastur reigns supreme.

All shall be revealed when you travel to Dim Carcosa, meaning that the locations in this scenario have no unrevealed side. Instead, their reverse sides bear story cards to push your plotlines forward to their final curtain. In this lost realm, insanity is inevitable. But even with your mind fractured and broken, your investigation does not end here. In Dim Carcosa, you are not defeated when you have horror equal to or greater than your sanity. Instead, you journey on, facing impossible odds in the hopes to return home alive.